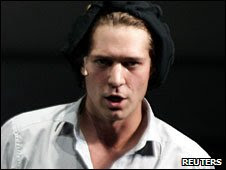 An actor narrowly escaped death after slashing his throat on stage with a real knife, instead of a blunt stage-prop blade.

Daniel Hoevels slumped to the floor with blood pouring from his neck during a performance at Vienna's Burgtheater.

He was rushed to hospital with a deep slice to his throat which fortunately missed his main artery.

Austrian police are investigating whether the incident was a mistake or a deliberate attack on the actor.

"If the actor had put a little more pressure on the knife or even struck an artery, he would probably have bled to death on the stage," a doctor who treated Mr Hoevels, 30, told the newspaper Oesterreich.

The real-life drama happened last weekend during a performance of Friedrich Schiller's play Mary Stuart, about Mary Queen of Scots.

Mr Hoevels's character was supposed to commit suicide and the actor used what he thought was a blunt prop weapon.

The audience is said to have applauded what they thought was a stunning special effect, and only realised something was wrong when the actor staggered off stage to receive treatment.

Austrian police launched an investigation and have not ruled out the possibility of foul play, Austrian media reported.

They were told that the knife had been bought at a local shop.

"The knife even still had the price tag on it," one officer said.

Mr Hoevels recovered after hospital treatment and, in true theatrical tradition, appeared on stage the following night although with a bandage around his neck.