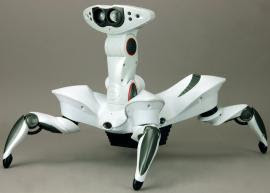 NEW YORK--What's black and white and scares me?

The Roboquad robot from WowWee for $99. It's the first robot that's ever startled me or made me nervous. And I loved every minute of the interaction.

I've had the opportunity to meet more sophisticated lifelike robots such as Domo and "Tony X." While some find these humanoid robots unnerving, I've never felt anything toward them but the amused affection one might have for a dog or, say, a Muppet.

The Roboquad is another story.

Watching them in action, these arthropods move so organically that they really seem alive and uncontrollable. It's hard to believe it takes four C batteries. The robot has 72 functions and 40 commands, and it gets better doing them the more you play with it. It can also be put in autonomous modes for exploring its environment or acting aggressively.

And while we all know in the back of our minds that companies are producing robots for war, it's quite a jarring thing to see them before you acting aggressively.

One Roboquad can be made to fight another when in aggression mode. I saw one actually rear up on its hind legs toward the other, a moment I sadly missed with my camera.

In addition to having the quick crawl of a crab, the Roboquad has the same texture and color scheme of an Imperial Stormtrooper from Star Wars. Whether or not this was intentional on the part of WowWee, it certainly makes the robot more intimidating when in aggression mode.

Roboguards also react to changes in light, sight and sound. They have a fast-moving head that lets it "see" shapes, sizes and movement. It will flinch if startled. After my camera flash went off, one of the two Roboquads I met at DigitalLife 2007 quickly turned its head and looked directly at me before resuming his wrestling match.

And you know what? For all these reasons, plus the price point, people are going love this robot.