Nyko Wireless Nunchuck takes the wire out of the Wii waggle 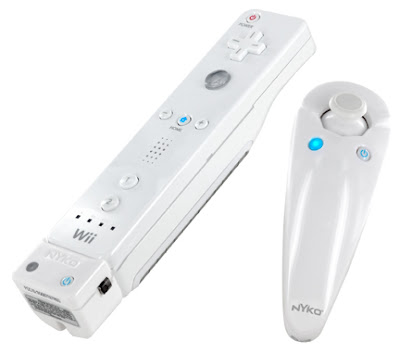 The Nintendo Wii uses a wireless remote to begin with, but that remote still manages to use a cord half the time. Most Wii games use both the Wii Remote and the Wii Nunchuck, an analog stick peripheral that plugs into the base of the remote via a long cable. Nyko first cut the Wii cord with the Wireless Sensor Bar and is taking away yet another tether with the Wireless Nunchuck.

The Nyko Wireless Nunchuck connects to the Wiimote via a little wireless dongle that clicks into the controller's accessory jack. Once plugged in, tapping the connection buttons on the dongle and the Nunchuck syncs them together, letting the Nunchuck work as if it was physically connected to the remote. The Nunchuck runs on two AAA batteries, which Nyko claims can provide up to 30 hours of gameplay. It has all the same features as the original Nunchuck, including analog stick, C and Z buttons, and even an accelerometer for games that use the Nunchuck for motion controls.

I spent a few minutes playing with the wireless Nunchuck, and it feels very much like the original. The shape is nearly identical to the corded Wii Nunchuck, and it sits comfortably in the hand. I'm not sure if it will work with the Wii Zapper, but since the Zapper lets you stash the cord inside it anyway, it's not that important a feature. The wireless dongle only measures an inch or so and keeps the same profile as the remote itself, so it doesn't feel too different from using a bare Wiimote or a Wiimote and corded Nunchuck.

The Nyko Wireless Nunchuck ships in late January/early February and will retail for about $30.